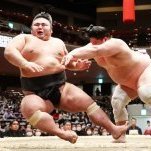 Most Similar and Most Challenging Yusho Schedules