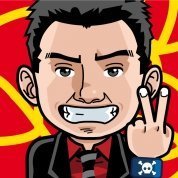 Kamusta (What's up?!) from Manila, Philippines!

By yutarotanaka, August 25, 2017 in Member Introductions